Yeah, everyone else and their mom is posting this but, hey, funny is funny.

and besides, I likes me some prairie dogs.
Posted by Matthew Russell at 5:53 PM No comments:

Like I said in the prior post, the first images I saw for The Incredibles had me excited from the start. There was something different and unique. It was as close as Pixar had ever really come to something dark.....except for the opening 5 minutes of Nemo. Sweet Moses Malone, that opening made Bambi's mom taking a bullet look like something from a Precious Moments catalog. Anyway, The Incredibles was filled with aspects of that darkness, that "bad things can happen to good people and even good kids." There was real conflict between Helen and Bob. To me, it felt like Pixar was shooting for something different. Not all moody and brooding, but honest and accessible.

That potential looks like it might be there again with Wall-E. I have no idea if it is going to be dark or brooding or have marital arguments over the kids but from some of the rumors flying around it definitely sounds like Pixar is going for different and potentially ballsy. I hope this works out. I really want to be excited over the release of an animated film again. Between Wall-E and Horton Hears a Who, 2008 might be a very exciting year.

I'm intentionally avoiding everything I can about Ratataouille. The trailers look pretty unimpressive....but I thought the same about Monsters, Nemo and The Incre....ok, bull, I loved the Incredibles from the first moment I laid eyes on Bob Parr's round, spandex covered belly. But Nemo and Monsters were way iffy starting out. With both of those films I was soooo happy to go in not expecting perfection but getting it (or a close damn approximation of it) up on the screen anyway (I still love you Luxo.) I'm hoping that happens again with Rat.
Posted by Matthew Russell at 10:01 PM 2 comments:

Once again, I'm getting crap for not posting enough...even though I'm pretty sure there's still only like, maybe, four people who read this thing. Anyway, I should be able to get back to posting something worth reading now. I've got a couple folks I want you guys to meet...and if they're willing to answer my list-o-dumbass questions...I should have something up soon. 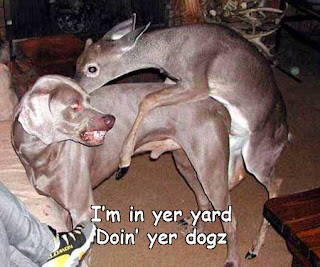 So the dogs were outside freaking out and I'm all like "what the...?" and the dogs are all like "bark, bark, bark"...and I'm all ticked because they know I don't speak dog that well, especially when they're talking all fast 'en stuff. Right about then the rest of the family bum rushes me to explain that the dogs were getting gang signs flashed at them by a passing deer...which is strange since deer don't really have the appendages for proper gang signage. Anyway, we have deer in them there hills. I love it here.
Posted by Matthew Russell at 11:50 AM 3 comments: