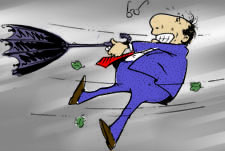 Sweet mother of all that's holy. So far Seattle has shown us it can hang with the big boys when it comes to weather. Since we got here we've seen Seattle's "record heat" (kinda unimpressive, but hey), "record rain" (ok, if Seattle calls it record rain, you better freakin' believe it), "unusually early snow" (almost had a white turkey day) and last but not least, the "record wind storm"...you best believe that one. It hit Thursday night with sustained winds in some areas close to 130 mph...crap!!! We were lucky, we only lost power for two days (even though I didn't get my internet back up till today...but who's complaining?) I did get to utilize my primitive hunter/gatherer skills and found coffee...mighty hunter next found donuts, mmmmm mmmm. Anyway, things are back to "normal"...which kinda sucks, I was gonna bring back karaboo next (or whatever I could take down with my Honda.)
Posted by Matthew Russell at 8:58 PM 2 comments:

So the AntBully DVD came out on Tuesday. I wish I could say I was more excited about it but I look at AntBully like a strange bookend along side the Jimmy Neutron feature. Jimmy was fun and exciting and signified all the potential that would be this little upstart animation studio in Dallas. AntBully felt like the complete opposite of that. It's like this story I heard about a guy who has appendicitis while he's eating at a McDonald's. From that point on he can't stand the smell of McDonalds food, not because the food caused the appendicitis but the association of the smell of the food with the tramatic event. There were some great things that happend during the production of AntBully but ultimately I will look at it as the time when my cynicism towards the industry first reared it's ugly head.

Now that we've gotten past my public therapy session we can talk about the DVD itself. AntBully is a solid movie that you can enjoy watching with your kids. The transfer is great, it sounds good...hell, it even has a really cool lenticular cover on the DVD packaging and there are some fun extras, like the interstitial shorts we did for Cartoon Network. It does has the obligitory "ooh, ahh...this is how we make cg animated movies" featurette. And to my surprise it did have some of the animated sequences that were cut from the film due to rewrites and test audience reaction....this is where I put on my cranky hat. The deleted scenes showed some of the potential of what I thought the film could have been.Don't get me wrong, there's definetly some crap in there that you watch and go "damn, I can see why they cut that." On the flip side there are a couple sequences that were just pulled for all the worng reasons. A prime example being one that involved Zoc's back story. It shows him as a young pupa watching his entire colony being wiped out by the exterminator. There is more emotion in that one sequence then I feel ended up in the entire finished movie. And it was cut for a really poor reason...tempo. Warner Bros wanted the film to keep hop, hop, hopping along like a kid on too many pixie stix. I understand that movies, like music have a rythem...but to affect the story so that the film has a "beat you can dance to" feels like the wrong reason to slice and dice if the story suffers for it. all the great backstory and character development that was originally in the film was all stripped away so that "we could get to the good stuff quicker and ride that roller coaster all the way to the credits." Too bad it wasn't enough to motivate more people to come along for that ride.
Posted by Matthew Russell at 1:33 AM 3 comments: