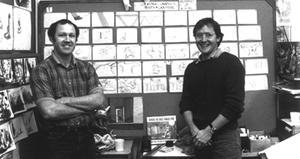 Youtube is like a grandparents attic. Lots of stuff packed in there, most of it isn't worth much monetarily...really fun to look at but not worth anything other than sentimentality. Then you find that chest in the corner that contains a treasure...Action Comics #1, a letter from George Washington, the head of Jimmy Hoffa. Well, over at youtube there is that chest over in the corner and in it is a lecture done by Glen Keane several years ago. The quality is "iffy" but the content is great. I'll post them in GRAB-BAG for your viewing pleasure. For those of us who make our living animating, finding something like this is awesome....and it's a hell of a lot better than finding Hoffa's head, that would be seriously nasty.
Posted by Matthew Russell at 9:45 PM 2 comments: 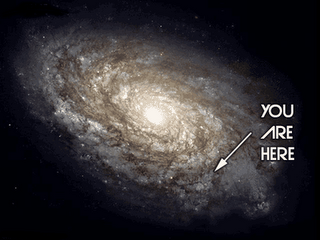 Holy crap! So a couple of weeks ago Burke showed me statcounter for my website. I had been keeping up with how many people were hitng the site but not really paying attention to anything past numbers (first time visits, returning, blah, blah). The cool thing about statcounter I quickly found out is it's handy little map feature to show you where these wonderful (and obviously bored) people are located. I damn near made a poopy in my pants when I saw some of the locations. So, I wanted to give a quick "shout out" to some of those "peeps" in Singapore, Johannesburg, Madrid, Nice, Zurich, Charlotte, D.C., Sierra Vista, San Fran and L.A.

Wow...there are some bored people all over the world in desperate need of entertainment. Now granted, most of these kind folks found me through other, way more interesting people than myself. But I appreciate it none the less. Hopefully, knowing that there are more then just my mom and a couple guys I owe money to looking at my website, I can use this as motivation to keep my posting more up to date. Some things are still on the "to do" list...my "You got the job, what the hell do you do now?" series is finally being written as well as the next couple of folks for the "Introducing" series (Next on the chopping block... Andrew Burke himself, I haven't told him yet so keep to yourself for now...this one will be filled with 33% more fun because we'll be taking a photo tour of Seattle and seeing what Andrew will do for 20$ and a Guinness.)

On a different note, some of you folks might have seen the Blue Sky Scrat short that got "leaked" on Google video (and then was quickly removed.) I had the pleaser of watching this fine bit of work and wow, what a fun piece. Aaron Halifax, of Blue Sky fame, started at Valve a couple weeks ago and worked on this before he sold his soul to the devil and joined us in Washington. I have to say, I enjoyed this more then most of the CG work I've seen this year and the slightly different approach to Scrat's animation was perfect. Not quite so snappy all the time...adds a whole new level of texture, very nice. So more shout outs to Tom, Jerrod, JC and the rest of the Blue Sky crew for making more things that make my eyeballs smile.

Keith Lango is my hero... 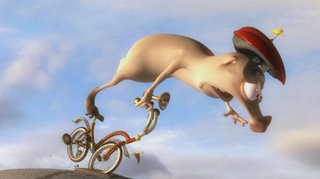 Well, besides the fact that Keith is too cool for school in is lovable grump sorta way...he always manages to find some of the coolest stuff and folks in the industry. In this case he's found both with Bernhard Haux. Take a minute to look through his site and breathe in the freshbaked smell of cool stuff and also read the nice little write up over at Lango's Utopia of Animation Fun...I miss my Lango.
Posted by Matthew Russell at 11:56 PM 3 comments:

More of this kind of stuff...

I love the look of this. The site is really bare bones which is so appropriate. The designer is Art Jensen, I found out a little more info here. This has the start of everything I want in a teaser...mood, style and very, very little of the story...let me find that out for myself. Great way to peek interest.

...now, if only Hollywood could follow suite and give me something more then talking animals and fart jokes. I was more excited watching this trailer then I have been with any film trailer this year with the exception of 300 and, yes, Jackass 2. The mood reminds me a bit of "The Spider and the Fly".
Posted by Matthew Russell at 11:19 PM 2 comments:

There's an article posted on cg-char concerning the state of cg. Once again the author just boils it down to "too damn many cute, fuzzy, talking animal movies"...maybe not in those exact words, but that's the idea. It's an interesting time in the industry. All around box office is down for the year, not just animated films. It all boils down to content. But take a few minutes and read it and feel free to leave your thoughts.
Posted by Matthew Russell at 6:38 AM No comments: