Dr Horrible, not so horrible.... 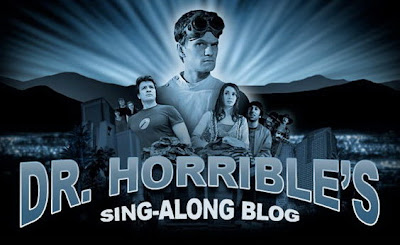 I have no idea why I didn't watch Dr Horrible's Sing Along Blog when it hit the web last year. But I am glad I got to watch it all the way through on dvd...Hooray Net Flix.

In a nutshell, awesome. I know some people were torn about the ending (not giving it away in case other folks are like me and have waited waaaaay to long to watch this thing.) But as any comic book geek knows, it ended the way it needed to end. Oh, and N.P.H. is the man.
Posted by Matthew Russell at 11:49 PM No comments:

I've been seeing the promos for 'FlashForward' on ABC almost nonstop for the last month or so. The idea sounded pretty cool, the entire world blacks out for 2 minutes and 17 seconds. During that "black out" almost everyone has memories from six months in the future....

Now, this could have gone either way. David Goyer co-created, writes and directs the first episode. Going into this that's before and AWESOME thing and , well, a not so awesome thing. As a writer Goyer can be top notch. I mean, come on, his was the brainchild behind "The Dark Knight", "Batman Begins", "Blade" and "Blade 2" not to mention "Dark City". Yeah, he's written some stinkers too but we have proof that the man's got some writing talent. This lends itself to the AWESOME I mentioned a moment ago. My fear came into play when I read the "directed by" slot that had his name in it also. Here Goyer's track record is less "awesome" and more "really? that's the same guy that wrote Dark Knight?" I'm very happy to say that Goyer can now add his first solid notch on his directing belt.

As for the rest of the crew comprising the show, everyone has dedinitely brought their "A game." Joseph Fiennes is solid as the show's lead FBI agent who quickly finds himself square in the middle of trying to untangle the story behind this global event. Goyer surrounds him with a top tier cast. I was expecting a heavy handed mess but the show plays off very assured in it's execution. The fact that they managed to cram at least the framework of this global event and introduce the major players without feeling rushed or forced was great.

ABC has managed to drag me into another hour of tv viewing because I really do want to see how this all plays out. They've already established characters I'm interested in and set up a possible future that has the possibility to be absolutely facincating and heart breaking. If you're a fan of "Lost" or (let's go back a bit) loved the first 3 season of X-files then you'll probably enjoy "FlashForward."

....if you don't like it, that's fine....not everyone likes fun or awesome things. I hear there's a "Murder She Wrote" marathon over on TNT that should be right up your alley.
Posted by Matthew Russell at 12:09 AM No comments:

It's a Dog's Life

My wife and I picked Chloe out of a litter of 12 puppies. She was the second largest pup and the largest female. Technically she was a yellow lab but her fur was so light that a lot of folks called her a white lab.

We decided to get a dog because we wanted to have kids. I know that sounds odd but we had been climbing up the ladder of things we could love and keep alive. My wife had a cat already when we got married. Shortly after that we adopted another cat from the Humane Society. A year after that we adopted a kitten. We loved every new member of our family and they all got along like, well, family.

We brought her home when she was 7 weeks old. I was in art school at the time so I got to spend tons of time with her. There was the occasional bout of "why the hell did we get a dog?!?!" But way more often than not each day with her was just a little more fun than the one before it. We even based a new car purchase on the fact that Chloe was too big to sit on the seat of my little, Nissan pick-up truck. Big was an understatement...at 7 months she was already 70 pounds. She would top out at just under 100 pounds. Our vet called her our "big framed gal."

Chloe was 2 when our first daughter was born. That was when we started calling her the "gentle giant." Except for the occasional grumble (sounding more like a cranky old man than a dog) Chloe never once showed anything but love and patience with our girls. She was almost too good. Our daughters assumed that all dogs the size of small ponies must be as sweet as her. We managed to teach them that's not always the case. Chloe's sweet disposition was also the deciding factor in us adopting our second dog. Bliss (she came with that name so it stayed) was our rescue dog and quickly became Chloe's best friend. Chloe and Bliss would spend the next several years almost completely inseparable. Bliss has her issues so they quickly became known as "tweedle dee and tweedle dumb-ass."

Last year Chloe had her "episode." She collapsed. We took her to the emergency vet. We found out that she had internal bleeding and they ended up removing her spleen. Chloe had cancer. Hemangiosarcoma to be exact. We opted out of traditional chemo and went the "alternative route." We decided to do this because we couldn't bare the idea of her spending time feeling bad because of the treatment. The type of cancer she had guaranteed that she only had a short time and we wanted that time to be as quality as it could be. We were told we'd had 3 months if we were lucky...we got 8. They were an incredible 8 months too. Chloe did have some bad days but more often than not her days were really good. I cherished those days as did my wife. We knew what was inevitable so getting to spend this extra time with here was priceless.

I was in Austin on business when my wife called. Chloe was having a bad day. It quickly became obvious that it wasn't one of her normal bad days. She was bleeding internally again and the vet believed that the cancer had finally spread to her liver. My wonderful, incredible and loving wife made sure that Chloe's last bit of time with us was peaceful and filled with love.

Every room now seems to have a huge hole in it where our gentle giant should be. Some folks will probably read this and think, "dude, it's just a dog." That's fine. They don't get it and I don't expect them to. But to us she was more than a dog. Chloe helped us get ready for the much larger decisions in our life. She made our children smile daily (not every child has a giant dog that will patiently wear a tutu and a wig.) She was always there with unconditional love no matter how far I drug her across country (we did find out that she was a mountain girl at heart.) I think about her every morning as I walk Bliss and Maggie (our other dog.) Chloe was sweet, loving, gentle natured and one of my best friends.