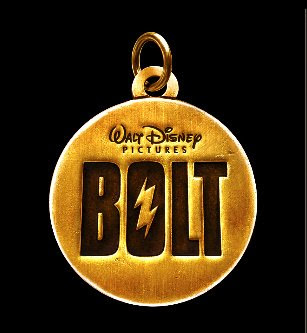 So while my lovely lady was out having some "lovely lady time" I took our girls to see Bolt...which is a way of saying I wanted to see Bolt and she had other "not nearly as fun as seeing Bolt" things to do and since, when it comes to seeing movies the girls and I think on the same level, the girls came with me.

As far as movie watching attention spans go, my youngest's attention span lasts about as long as the popcorn does so to say that she was all wiggly about half way through should come as no surprise. My oldest and I, on the other hand, were completely caught up in the show. I really enjoyed this movie. Disney' earlier efforts into 3D were pretty hit and miss with Chicken Little and Meet the Robinsons. But with Bolt I think they're really starting to show signs of the good storytelling we all used to get excited about at the mere mention of a Disney animated film. That's not to say this film is perfect, it is a little paint by numbers with the story but it never sinks into pop culture quicksand the way so many animated films feel like they have to do to make a profit.

One thing that I really enjoyed with the story is the omission of a real villain. Much like Finding Nemo this is very much a roadtrip of self discovery and the only real badguys are the ones in Bolt's T.V. world.

I haven't seen Mad 2 yet so I can't comment on it but I will say that for the most part Bolt adds to a wonderful string of animated films that have been released over the last year or so starting with Horton Hears a Who. It's been really exciting seeing an animated film in theaters and thinking to myself "I really can't wait to get that when it comes out on DVD."
Posted by Matthew Russell at 5:36 PM 2 comments: